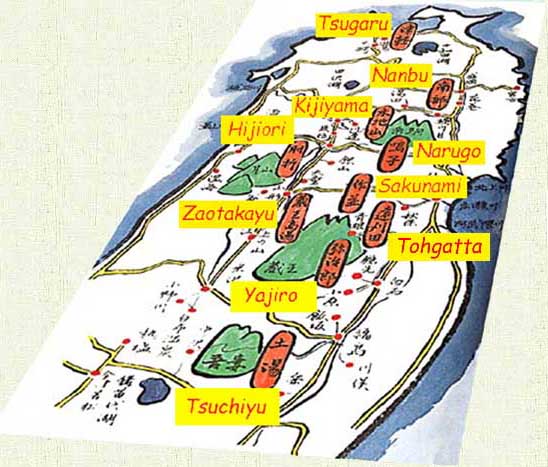 Kokeshi dolls have been produced in the Tohoku District for more than 170 years. Originally, most Kokeshi dolls were purchased by peasants at the hot springs where peasants stayed. Kokeshi were the best souvenirs for girls or neighbors

There are some variations of shapes and designs for Kokeshi dolls, which are categorized into 10 or 11 groups. Those variations are due to their family or traditional history, since most of craftsmen faithfully succeeded their master's or father's forms and designs. Due to this, those groups have built a geographical distribution.
This map shows the most considerable Kokeshi producing areas, which are correspond to the 10 groups.
Click the yellow boxes on the map, and you can get more details on each group and a representative example.